Town of Franklin Board Meetings

Supervisor Willman called the meeting to order at 5:30pm. The Pledge of Allegiance was recited and the Town Clerk called the roll noting a quorum present.

Resident Ed Martin submitted the following letter to the board, requesting it be recorded into these minutes. The board had no objection to the request. 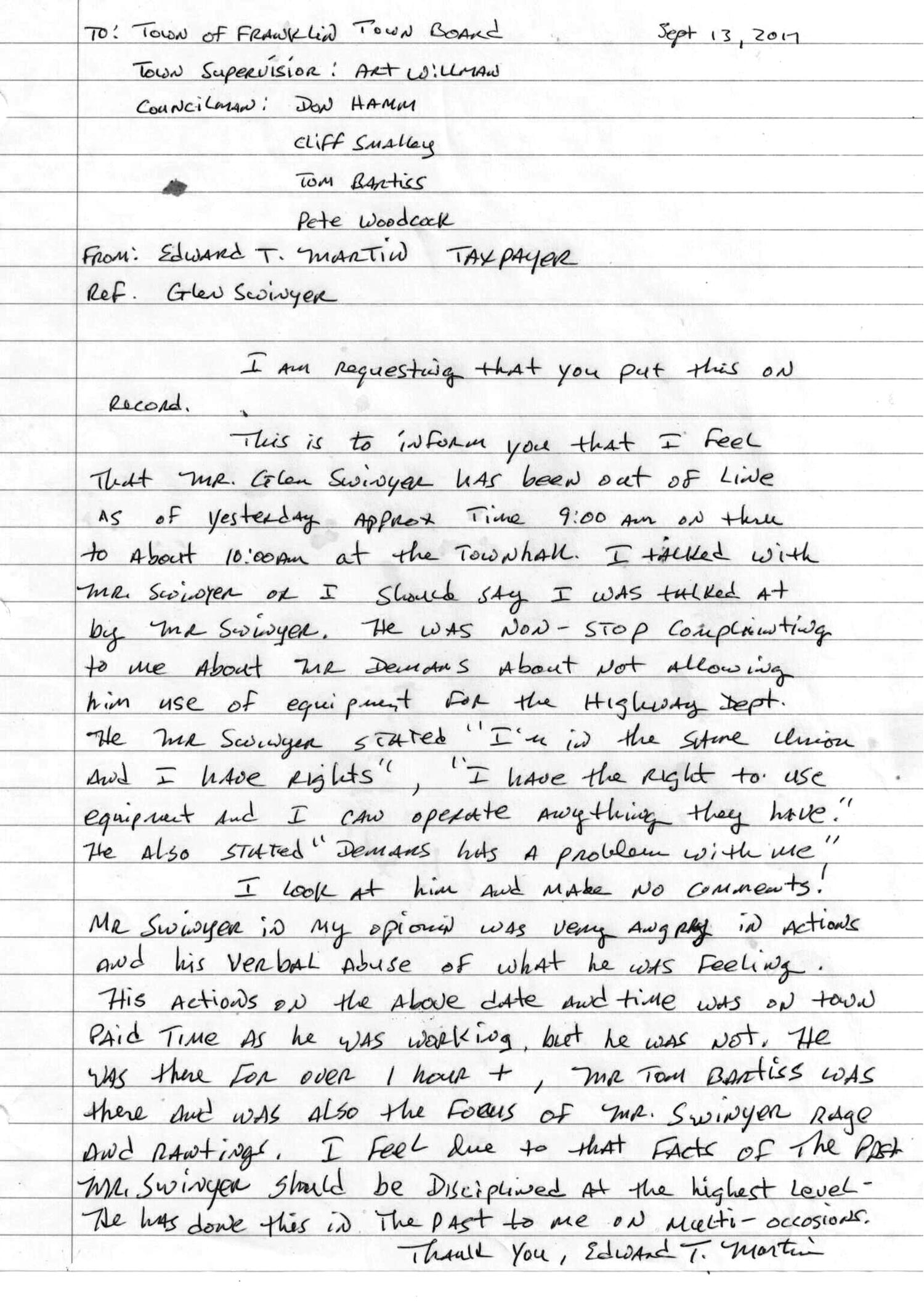 APPROVAL OF CLAIMSThe board audited and approved payment of the following:

B. 2018 Salaries for Elected Officials

On a motion by Councilman Smalley, second by Councilman Bartiss, BE IT RESOLVED there will be no increases in the yearly salaries for elected officials for budget year 2018.

Those voting no: None

C. 2018 Salaries for Newly Elected Officials - The board discussed salaries for newly elected officials. As Supervisor Willman, Town Clerk Lauren LeFebvre and Town Justice Roger Symonds are unopposed in the upcoming election, salaries for those positions will be discussed at a later date. Discussion was held regarding newly elected town board members. As the town board salary is established in one budget line, Supervisor Willman will contact the Association of Towns regarding this procedure. Changes, if any, will be established prior to adoption of the 2018 budget. It should be noted that Health Insurance is not offered to ANY Town of Franklin elected officials.

On motion by Councilman Don Hamm, second by Councilman Smalley, BE IT RESOLVED the Town of Franklin Town Board does hereby set the yearly salary for a newly elected Highway Superintendent at $46,000 annually.

Those voting no: None

B. Solar Project - RFP's are under review.

A. Cemetery - The Town Clerk wishes to confer with Councilman Smalley at a mutually convenient time.

B. Building - Discussed above

Councilman Bartiss moved, second by Councilman Hamm, to enter into Executive Session at 6:25pm to discuss a matter relating to the appointment, promotion, demotion, discipline or removal of a particular individual. (m/s/p all aye)

Supervisor Willman reopened the public meeting at 6:45 and stated no decision was made in Executive Session.